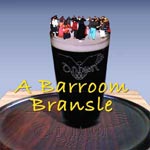 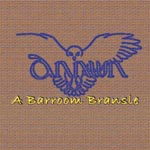 This album was never released on CD, only on tape. We called it "Musick for the Current Middle Ages", and created it for exactly one audience, our friends in the SCA (Society for Creative Anachronism). The title is a pun: "bransle" is pronounced "brawl". In the cover picture, you can see the dancers performing a bransle around the edge of the beer glass. This cover picture is the one I created when I thought I would make it available on CD, not the one from the tape.

The band at that point was:

We also brought in some other help. Linda VonBraskat and her daughter Ceridwen (now named Sabre) sang Linda's song Fair Mistland. The extra voices in Sumer are Arielle Dark, Patti Wildermuth, and Paul Johnson. All the keyboards Elton didn't play live were played by his computer, "Willie Macintosh". (It can be hard to tell which those are. He's pretty good at sequencing. Your best clue is, he doesn't really play the piano very well.)

We've been privileged over the years to work with some fabulous bass players. Sean was one of those, and in some ways remains our (forgive me) bassist for comparison. Along with the bass, he played the recorders and dumbek, and sang. He was responsible for the insidious arrangement of Pipe on the Hob on Lovers, and did most of the mixing for this album.

On these songs, any time you hear live drums being played, it's Sean, except for the bodhran on Black Swan Rises, which is Jennifer, and those on Twa Corbies, which is all of us. The occasional mandolin and live keyboard is Elton, who also programmed the other keyboard parts.

This album is unusual in that Leigh Ann plays three separate fiddles on it: her usual five-string violin/viola, a hardanger fiddle, and a medieval reconstruction that she made herself. It wasn't a very good one, but she made it so we had to use it. Sean absolutely hated trying to record that fiddle, saying it was the only instrument he ever heard that sounded harsh in all its frequency ranges. Which, thinking about it, probably makes it a true medieval reconstruction.

You can download the recordings! Right-click on the track name, select "Save Target As..." (IE) or "Save Link As..." (Firefox).