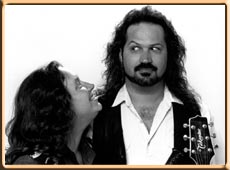 We called it "Celtic rock". Yeah, right. Although it had Celtic influences, it never really was Celtic, any more than were Steeleye Span or Pentangle or Renaissance or the Grateful Dead or George Clinton, all of whose influences showed up in our songs. Even when we played Celtic songs such as Follow Me Up to Carlow, our rendition was from somewhere else. But y'know, everyone sort of smiled and went along with the joke and generally had a good time. Even through the early days, when — let's face it — we stank. So ... thanks. All you fans and friends, and you know who you are. This collection is for you. 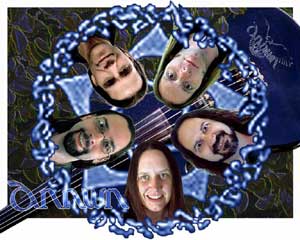 Here, I've put together all the Annwn albums I'm still willing to admit to. I've tried to provide liner notes, lyrics, and a few insights into the songs. Oh, right, and the MP3s, which are the main reason you're here. I put up just about everything I still have available. The album And Then She Said, contains material that was on the "other" albums, or which we recorded but never released. I remastered them all, which helps the sound a lot — I pretty much know what I'm doing now. Finally.

I also made some additions to the track lineup of albums you may have bought from us:

If you left-click on the MP3 links, the songs will stream; but if you right-click (control-click on the Mac 1-button mouse) you can select "save link as" to get them onto your own computer, after which you're free to do with them as you like, as long as it's for your own use and you don't try to sell them. These songs are all offered free for personal, non-commercial use. ...But if you do want to use them for something commercial, come over to Nithaus and talk to Elton — we can work something out.